FAQ What Is Cryptocurrency?

You are using an out of date browser. It may not display this or other websites correctly.
You should upgrade or use an alternative browser.
Frequently Asked Questions

Cryptocurrencies let you buy goods and services, or trade them for prof​ 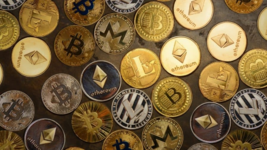 A cryptocurrency is a form of payment that can be exchanged online for goods and services. Many companies have issued their own currencies, often called tokens, and these can be traded specifically for the good or service that the company provides. Think of them as you would arcade tokens or casino chips. You’ll need to exchange real currency for the cryptocurrency to access the good or service.
Cryptocurrencies work using a technology called a blockchain. Blockchain is a decentralized technology spread across many computers that manage and records transactions. Part of the appeal of this technology is its security.

2. How many cryptocurrencies are there? What are they worth?​

More than 10,000 different cryptocurrencies are traded publicly, according to CoinMarketCap.com, a market research website. And cryptocurrencies continue to proliferate, raising money through initial coin offerings, or ICOs. The total value of all cryptocurrencies on July 16, 2021, was more than $1.3 trillion — down from April's high of $2.2 trillion, according to CoinMarketCap. The total value of all bitcoins, the most popular digital currency, was pegged at about $599.6 billion — down from April high of $1.2 trillion.

There’s no question that they’re legal in the United States, though China has essentially banned their use, and ultimately whether they’re legal depends on each individual country. Also, be sure to consider how to protect yourself from fraudsters who see cryptocurrencies as an opportunity to bilk investors. As always, buyer beware.

4. Why are cryptocurrencies so popular?​

Cryptocurrencies appeal to their supporters for a variety of reasons. Here are some of the most popular: